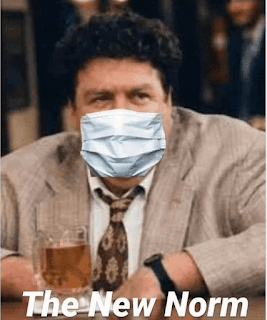 Knock knock! Who is there? 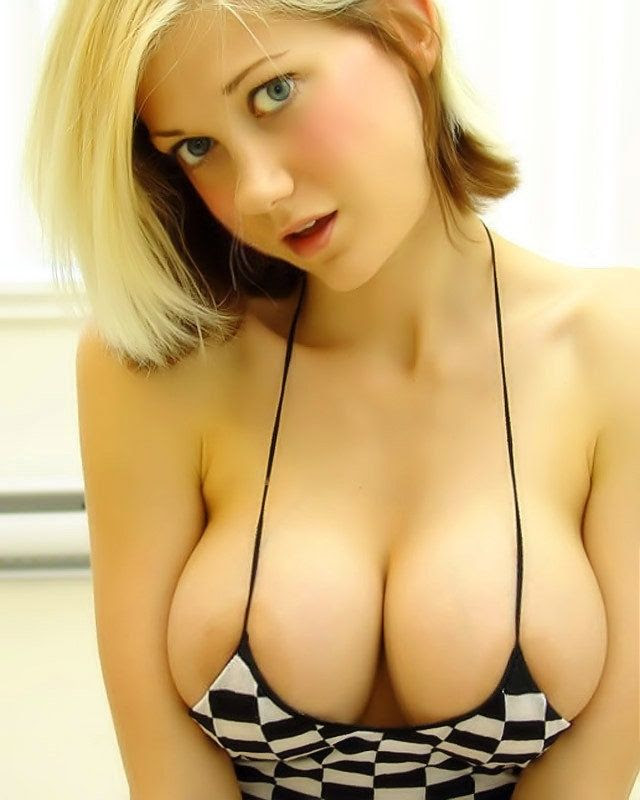 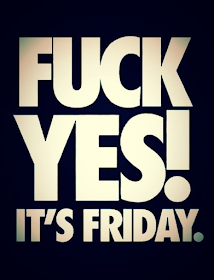 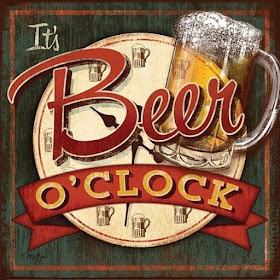 and! .. maybe a little sumptin' sumptin' 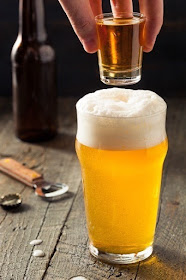 I think I got this one dialed in for ya' 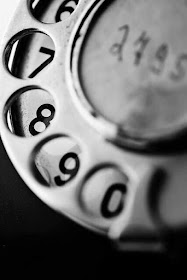 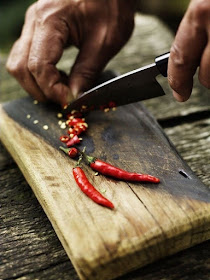 “It’s a mess out there now. Hard to discern between what’s a real threat and what is just simple panic and hysteria. For a small amount of perspective at this moment, imagine you were born in 1900.

“On your 29th birthday, the Great Depression begins. Unemployment hits 25%, the World GDP drops 27%. That runs until you are 33. The country nearly collapses along with the world economy.
’When you turn 39, World War II starts. You aren’t even over the hill yet. And don’t try to catch your breath. On your 41st birthday, the United States is fully pulled into WWII. Between your 39th and 45th birthday, 75 million people perish in the war.

″ Smallpox was epidemic until you were in your 40′s, as it killed 300 million people during your lifetime.

“At 50, the Korean War starts. 5 million perish. From your birth, until you are 55 you dealt with the fear of Polio epidemics each summer. You experience friends and family contracting polio and being paralyzed and/or die.

“At 55 the Vietnam War begins and doesn’t end for 20 years. 4 million people perish in that conflict. During the Cold War, you lived each day with the fear of nuclear annihilation. On your 62nd birthday you have the Cuban Missile Crisis, a tipping point in the Cold War. Life on our planet, as we know it, almost ended. When you turn 75, the Vietnam War finally ends.

“Think of everyone on the planet born in 1900. How did they endure all of that? If you were a kid in 1985 you may have thought your 85-year-old grandparent did not understand how hard school was. And how mean that kid in your class was. Yet they survived everything listed above. Perspective is an amazing and valuable gift. Refined and enlightening as time goes on. Let us try to keep things in perspective. Your parents and/or grandparents were called upon to endure all of the above – today we are being called upon to stay home and sit on the couch.”

I Feel The Same Way... About the bacon header ! 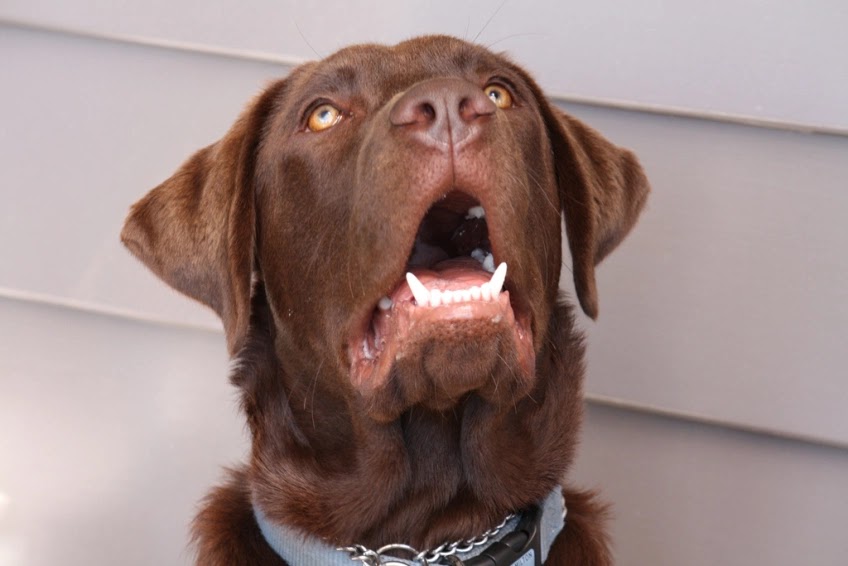 Meanwhile, In The People's Republik Of mAssachusetts. 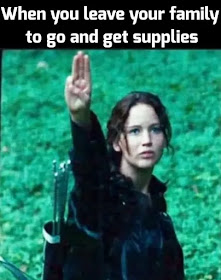 Joe passed away March 29th of this year from complications related to COVID-19. He was a great country artist that charted several hit songs in the 90's. In later life, Joe took a more laid back approach to living and switched the sound of his music. He even recorded some Bluegrass. The song in the video below, Route 5 Box 109, is one of my favorites of his. The song is not for everybody, but most growing up in rural areas, particularly the South, in the 60's and early 70's will make the connection. RIP Joe.

FLORIDAY BABY! Sheriff Wayne Ivey Is Sick Of The $H!T Going On At This Residence

When America Dodges The Bullet Of a Hillary Presidency....

But the Democrats, using theWuhan Flu, do a sneak attack.....

This is for the adults since most kids nowadays wouldn't know a jack stand from a shovel or a rake or a lawnmower or a hammer or some guy named Manual Labor .....

Anyway, kidding aside, Phil wanted to pass along this IMPORTANT RECALL to keep us old farts safe.

It seems the HF Jacks Stands are suffering some CCPvirus as well. 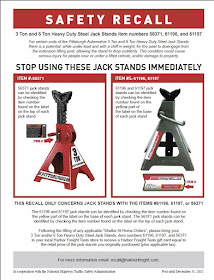 A Bunch From The Inbox.. 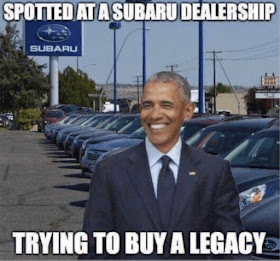 Kids Are Home. Stay At Home. Salons Still Closed. The New Normal. 8:00am

What Happened To Critical Thought?.. 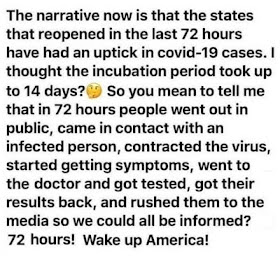 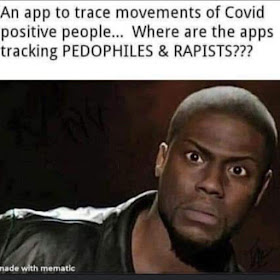 via The Burning Platform

Had Enough Yet?
Lots of questions people should be asking THEMSELVES <<

They looked goofy and acted goofier, but the truth is the super talented band known as Dr. Hook charted songs all through the 70's and into the early 80's. Enjoy

Here is some AM Gold. I had never seen the first one. Ray Sawyer, Chickasaw, Alabama native, can truly yodel.

She Will Steal Your Very Soul....Look, But For a Moment 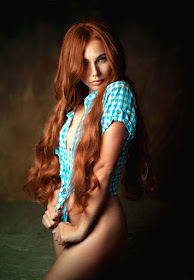 Last night I started, but never finished, a post about the reaction button numbers being lowered.  I have seen this countless times especially on popular posts. One example is this past FFF. I know many enjoy it from the comments section and the PM's I get in email.

When I got up this morning and sat down to surf I checked to see if anything changed.

Well, lo and behold,  I was right.  Last night I screen shot the reaction buttons. Top one is yesterday, bottom one is this morning. You can compare with your eyes: 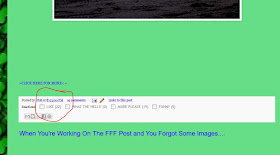 Interesting?    According to stats that one post has almost 6000 hits. Sure there are bots and crawlers and who knows what else tracking all of us, but the numbers from reaction buttons don't match what I encounter first hand.

Look, I do this to stay connected and as a hobby. I don't do this for the fame and cash and strippers and late night underground parties drug soaked with booze and loose woman. The invites to swanky hollywood parties to hobnob with the elite and make backroom deals and fuck over John Q Puplic. If I wanted to do that I would be a politician.

I do it share something that is funny, cringe worthy, newsworthy, tinfoil hat worthy or titillating.

What get's me though is the fact that for some reason, someone or something, is changing the numbers.  If I do a poll there are WAY more hits on the answers to my stupid questions.

If "they" are worried about a bunch of people liking a post on my little site then what other numbers would "they" really be determined to "adjust"?

Here's more data. From statcounter last night it maxed out my allotted data collection for downloads from FFF. A lot of people enjoy the various images.


Look at the hits for downloading images. Here's a quick video of my desktop:

That's 200 downloads in four hours. Is that all automated? I opened a few to show you the various images. I'm glad that people found them worth downloading like I did when I created the post to share them.


Here's the daily stats from statcounter:

I guess my point is the fact that The Feral Irishman gets thousands of hits. The most popular posts are usually Friday Femme Fatale, I know shocking huh?  With all the information I see in my stats, I find it quite odd that only 22... oops  17 people chose to hit like the like button.

Humor me if you will. Only answer if you DID stop by on Friday for the Friday Femme Fatale post.

Did you hit a reaction button on FFF?
Created with Quiz Maker

Thanks for playing, here's your free coffee! 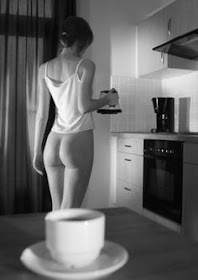 Unknown and Papa Bear thanks for the comments. True, some of  the surfers are on mobile devices that don't show the reactions. I didn't think of that. Thanks.  BUT  you're missing the desktop view of some fine images :)  Also it doesn't explain the numbers going down. 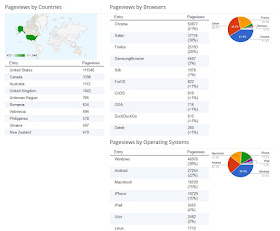