Kicking off my Labor Day weekend, last year, you all may remember this:
Torque Converter failure..... 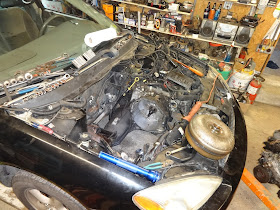 This year, a completely different story.
The wife's nephew got married this weekend, in Kentucky. Left the house at 3:20am, and landed in Georgetown right at 3:30pm. By the best to my recollection, I got passed by roughly five cars total on the way down. We were really hauling the mail. Other than dinner the first night, we mostly rode around with her family.

On the way home, I was not going to go through Cincinatti. The roads are a total cluster, with all of the road construction. So the decision was made to go straight east, and make our way through the Cumberland Gap. The ride home was soooooo much better. The roads were more interesting and a lot less traffic. One thing it took its toll on, was my fuel milage. There were hills where it was down in third gear for a mile or better, right around 4200 - 4500 rpm. It sucked it right up like no big deal.

1885 miles and not a single issue. Nothing, nothing at all. It didn't skip, sputter, or heat up - no matter how much I pounded it. The worst thing that happened was a wheel weight came off at 85+mph, and had a shimmy from the right front. Had to be the inside weight; as it made a hell of a racket, banging around the inner fender, when it came off.


Speaking of fuel milage, I haven't gotten an official total consumption figure, but my initial figure is 24.5 +/- mpg. Considering my average rate of travel was between 75 - 85mph, and we came home through the Appalachian Mountains, I'd figure that is pretty damn good. By my rough calculations, on the way down, it was getting right around 26.

As is my tradition; cars I own, that have proved their worth, become vested. I am going to have to name it now. 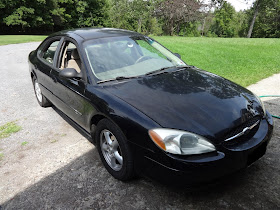 Hope everyone had a good weekend.