From The CDC, Interesting Data..

Between October 1, 2020, and March 20, 2021, FluSurv-Net sites in 14 states reported 210 laboratory confirmed influenza hospitalizations for an overall cumulative hospitalization rate of 0.7 per 100,000 population. This is much lower than average for this point in the season and lower than rates for any season since routine data collection began in 2005, including the low severity 2011-12 season. The current rate is one-fifth the rate reported at this time during the 2011-12 season. Hospitalization rates stratified by age will be presented once case counts increase to a level that produces stable rates by age.

A little more than half way down that page is a map of the US (snap shot for reference) follow the link above. 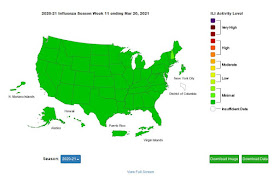 You can click on any state for data. I clicked NH which shows as slightly elevated in the minimal category.

That takes you to the State data HERE<<

What I found interesting wasn't any of the statistics, it was this paragraph:

I wonder what else is being surveilled and reported by UPC codes?