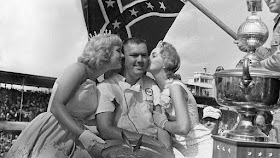 Junior passed away Dec. 20th. He had been in declining health and had Alzheimer's. Johnson embodied what NASCAR was. I write WAS because it is far from the sport it was back in its heyday before it abandoned its fan base and went "politically correct". Junior was a successful driver, mechanic, and later racing team owner. He began driving at age 8 and was hauling his daddy's moonshine by age 16. After he had won several races and had become locally famous, he was caught by federal agents tending his daddy's still. He served eleven months in a federal prison and was released early for "good behavior". In 1986 Junior was granted a full pardon by President Ronald Reagan. Tom Wolfe wrote an article about the life and times of Junior Johnson in 1965 and labeled him "The Last American Hero". This became the title of the 1973 movie by the same name starring Jeff Bridges. While I was looking for photos of Johnson, I came across the article below titled My Kind Of People: Junior Johnson that sums up not only Johnson's life, but the death of NASCAR, and the systematic genocide of the American male and American way of life. I hope y'all enjoy it as much as I did.

NASCAR legend Junior Johnson and his 1940 Ford.
My wife has recently re-arranged my office and, in the process, moved some books that I hadn’t read in a while, so the other day I picked up Tom Wolfe’s The Kandy-Kolored Tangerine-Flake Streamline Baby (1965) and began re-reading it. The best journalism — and Tom Wolfe, who died last year at age 88, was certainly the best — has an enduring value, and a lot of the stories collected in Streamline Baby were innovative works of cultural anthropology. The titular essay, first published by Esquire in 1963, examined the rise of hot-rod and custom-car culture in Southern California after World War II. Drag racing on L.A.’s Sepulveda Boulevard in the 1940s, a scene that centered around the Picadilly drive-in — that’s where the hot-rod culture originated, and Wolfe got the story directly from George Barris, king of the custom designs. It was this California trip that truly launched Wolfe’s career as an essayist. A writer for the old New York Herald-Tribune, Wolfe had gone out West to explore the custom-car craze, but couldn’t figure out how to write the story until finally, with deadline looming, his editor said, just send us your notes and we’ll have somebody else write it up. Wolfe sat down at his typewriter and cranked out a 49-page memo in about 10 hours and Esquire published the whole zany, wonderful mess.
Streamline Baby also includes brilliant little word-portraits of celebrities from early-1960s teen culture — “The Fifth Beatle” (DJ Murray “The K” Kaufman), “The Girl of the Year” (model Baby Jane Holzer), “The First Tycoon of Teen” (record producer Phil Spector) — but the real masterpiece is an article Wolfe wrote for the March 1965 issue of Esquire, “The Last American Hero,” about NASCAR legend Junior Johnson.
Robert Glenn Johnson Jr., a native of Wilkes County, N.C., got his start hauling moonshine through the hills of Appalachia, where his innovative methods of out-running federal revenue agents included a move that became known as “the bootleg turn,” a 180-degree reversal that set him running back through and past his hapless pursuers. Johnson’s father was a moonshiner who spent a total of 20 years in prison, and Junior was one of three sons who specialized in delivering the merchandise via souped-up cars. One day someone asked him to drive in a race at a local dirt track, where he was the first driver to develop the “power slide” technique in turns, and by 1955, he won five races on the NASCAR circuit. In 1960, he won the Daytona 500, where he invented the technique of “drafting” behind a faster car.

As should be obvious, Junior Johnson was highly intelligent, not in a bookish or abstract way, but in a hands-on practical way. He became a successful businessman, and as a NASCAR team owner helped develop such champions as Cale Yarborough and Darrell Waltrip. Now 87, Johnson is a living legend, his life made famous in the 1973 film The Last American Hero starring Jeff Bridges, and in 1986, President Ronald Reagan gave him a pardon for his 1956 federal moonshining conviction.
Tom Wolfe’s 1965 article is a sort of sociology text, and includes such spendidly written and insightful passages as this:
To millions of good old boys, and girls, the automobile represented not only liberation from what was still pretty much a land-bound form of social organization but also a great leap forward into twentieth-century glamour, an idea that was being dinned in on the South like everywhere else. . . . It got so that on Sundays there wouldn’t be a safe straight stretch of road in the county, because so many wild country boys would be out racing or just raising hell on the roads. A lot of other kids, who weren’t basically wild, would be driving like hell every morning and every night, driving to jobs perhaps thirty or forty miles away, jobs that were available only because of automobiles. . . . After the war there was a great deal of stout-burgher talk about people who lived in hovels and bought big-yacht cars to park out front. This was one of the symbols of a new, spendthrift age. But there was a great deal of unconscious resentment buried in the talk. It was resentment against (a) the fact that the good old boy had his money at all and (b) the fact that the car symbolized freedom, a slightly wild, careening emancipation from the old social order. Stock-car racing got started about this time, right after the war, and it was immediately regarded as some kind of manifestation of the animal irresponsibility of the lower orders. It had a truly terrible reputation. It was — well, it looked rowdy or something.
Now, Tom Wolfe was a genuine intellectual — he had a Ph.D. from Princeton, for crying out loud — but he was also a Southerner, a native of Virginia, and unlike so many other journalists who have written about the South, he had sympathy for the people he wrote about. He wasn’t out to write an exposé or to do what is nowadays called “investigative journalism,” but sought to explain the folkways of small-town Appalachia to the urban sophisticates who read Esquire, to make the reader see how wholesome and quintessentially American these people really were.
If you want to know why nobody gives a damn about magazines like Esquire anymore, it’s because the progressive politics of the 21st century forbid any sympathy for the kind of people who like NASCAR. Everything in big-league journalism now is about left-wing politics, more or less, and because North Carolina rednecks probably aren’t too excited about the Left’s agenda of open borders and transgender rights and all that, there is zero possibility a latter-day Tom Wolfe could get any New York-based magazine to publish an article like “The Last American Hero.”
The whole thing is basically a celebration of toxic masculinity, as the Gender Studies majors would say. Junior Johnson was not one of these “sensitive” modern guys, but a big muscular fellow who thrived on ferocious competition in one of the most masculine of sports.

What struck Tom Wolfe as so heroic in Junior Johnson was the man’s reckless daredevil courage. Johnson set speed records in qualifying simply because he was willing to take curves at tire-smoking speeds that even his fellow NASCAR drivers considered insanely risky. Going all-out on a straightaway is one thing, but it was Johnson’s absolute fearlessness in those high-banked curves that made him legendary. Wolfe captures perfectly the milieu of Appalachia that bred such courage:
The people there were already isolated, geographically, by the mountains and had strong clan ties because they were all from the same stock, Scotch-Irish. Moonshining isolated them even more. They always had to be careful who came up there. There are plenty of hollows to this day where if you drive in and ask some good old boy where so-and-so is, he’ll tell you he never heard of the fellow. Then the next minute, if you identify yourself and give some idea of why you want to see him, and he believes you, he’ll suddenly say, “Aw, you’re talking about so-and-so. I thought you said—” With all this isolation, the mountain people began to take on certain characteristics normally associated, by the diffident civilizations of today, with tribes. There was a strong sense of family, clan and honor. People would cut and shoot each other up over honor. And physical courage! They were almost like Turks that way.
In the Korean War, not a very heroic performance by American soldiers generally, there were seventy-eight Medal of Honor winners. Thirty-nine of them were from the South, and practically all of the thirty-nine were from small towns in or near the Appalachians. The New York metropolitan area, which has more people than all these towns put together, had three Medal of Honor winners, and one of them had just moved to New York from the Appalachian region of West Virginia. Three of the Medal of Honor winners came from within fifty miles of Junior Johnson’s side porch.
What were the odds, eh? Wolfe’s point is that the same conditions that produced such an extraordinary concentration of military heroes in the small towns of Appalachia also explained the kind of daredevil courage required to run 140 mph neck-and-neck with a man who might give you a bump and send you spinning into a concrete retaining wall.
Naw, Esquire would never publish an article like “The Last American Hero” in the 21st century. It doesn’t fit their narrative, which is all about Diversity and Inclusion and Progress. Esquire editor Jay Fielden’s hand-wringing over the #MeToo revelations and his virtue-signalling over “gun culture” signify his contempt for the sort of manly men who admire Medal of Honor winners or NASCAR drivers. The suspicion that these men vote Republican — 68% of white males in North Carolina voted for Trump, who carried Wilkes County with 77% of the vote — is enough to render them “deplorables” in the eyes of Esquire editors, all of whom voted for Hillary and are probably lined up to back Kamala Harris in 2020. Everything in journalism is politics now, and it’s not the kind of politics that celebrates moonshine runners or dirt-track racers or any other kind of authentic all-American masculinity. Esquire used to be a men’s magazine, but what is it now? I don’t know, and I don’t reckon Jay Fielden could explain it, either. It’s a ghost of its former self, another once-great institution the liberals have ruined in their decades-long crusade to destroy the American Way of Life. Selah.
Jeffery in Alabama at 7:07:00 AM
Share