Authorities say the female police officer mistakenly believed the apartment was her own. Read more HERE.

Dear Nike, this is what "sacrificing everything" really looks like. 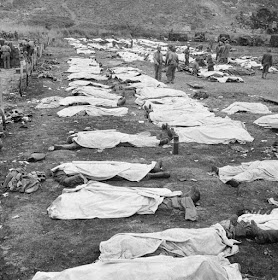 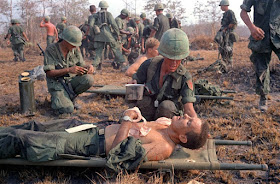 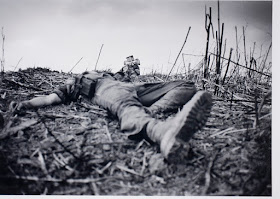 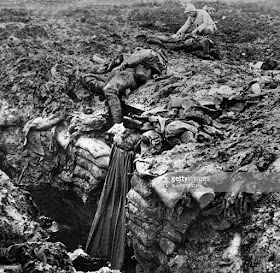 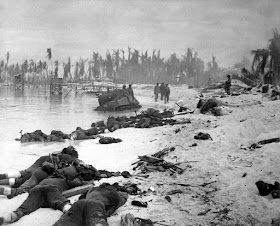 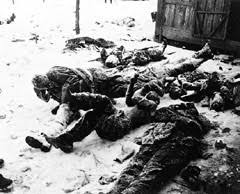 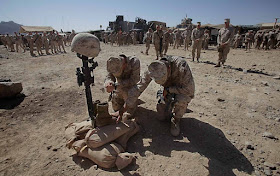 I encourage all to share this with Nike and the as many universities as possible. The College of he Ozarks released a statement stating they are dropping any affiliation with Nike. President Jerry Davis said, "if Nike is ashamed of America, we are ashamed of them". STORY

H/T to Benton in Knoxville
Jeffery in Alabama at 9:21:00 PM 8 comments:
Share

A diversion from the politics and madness today

This is a recently published video from a young man and his band local to northwest Alabama. The first time I ever met him was about nine years ago at a local high school fundraiser (my kids and he went to the same school). He was playing a six-string guitar with four strings and sounded pretty darn good. The next day I took him a set of guitar strings and you'd thought I'd given him a new car. Best of luck Bo.

The almost daily "meltdowns" by the unhinged left in this country would be comical if they were not so downright annoying at times. Protesters got the morning started again today by yelling and screaming during the SCOTUS hearings this morning in Washington, D.C. I think the childish behavior by these spoiled adults who protest anything that is not in line with their viewpoint is a plus for the "heritage right" movement in this country. The "dated" video below is tongue in cheek of course, but exemplifies exactly how the majority of the left "feel". Spread this around one more time so any "fence riders" might possibly be converted to the side of reason and right.

NEW YORK (World News Bureau) –
In a recent polling of 585 NFL players, nearly all of them were unsure of exactly what they are protesting regarding the position of kneeling during the playing of the National Anthem.
Here's a sampling of responses to the question:
"What are you protesting by kneeling during the National Anthem?"
"Pretty sure it's against Nazis - especially the white ones."
"We're protesting America becoming capitalistic instead of equal."
"I'm protesting against Trump saying black lives don't matter."
"We're against global warming and the police."
"We're showing the world that we care about, ah, things such as.... such as... ah, freedom from suppression?"
"Me and my fellow players are protesting the Constitution of Independence because of what it does to people of color."
"We are displaying our right to stand up by kneeling for our beliefs."
(another Yogi Berra)
"We are protesting Trump, because he, you know, keeping the black man down."
"Myself is kneeling to show that just because I'm American don't mean I got to act like one."
All the above comments are from National Football League players with 4 years of an American College “Education.”

No need to spend a fortune just to go shooting

To some, the older surplus rifles might be too heavy, not "tacticool", and to others they may appear just plain ugly. I, on the other hand, like them for several reasons. They are for the most part reliable. They are simple to shoot, clean, and maintain. Also, they are cheap to "feed". I saw this meme over at WRSA and it prompted me to post. I like shooting older surplus rifles such as the Mosin Nagant 91/30 in the video further down. I have shot them for years.  I started my boy shooting long distances  in reclaimed strip pits (coal mines) over twenty years ago. With a little training he, as an eight year old boy, could consistently make 800 yard shots on man-sized targets using a Turkish Mauser and 1940's surplus 8mm ammunition.  If anyone who is not a shooter is interested in shooting, there are still surplus rifles and ammo available.  Sadly the glory days of the early 90's when Turkish Mausers could be purchased for less than $40, K98 German WWII Mausers for $75, and Mosin Nagant 91/30's for $60 are long gone. I did see some 91/30's a few weeks back for around $200 and they are a bargain even at that price. These old war horses can still be found in pawn shops, gun stores, etc. If you are lucky enough to come upon one at a bargain, buy it. I bought two K98 rifles back in '94. I paid $79 each and that included shipping, dealer fee, and taxes. Today, Russian capture K98's with import marks are bringing upwards of $600.00 plus depending on maker, condition, etc. The guy in the YouTube video is dinging steel quite regular at 944 yards with open sights. No one is going to win a "long distance" competition with one of these old guns, but they sure are fun to shoot! 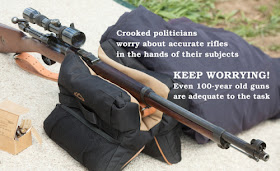 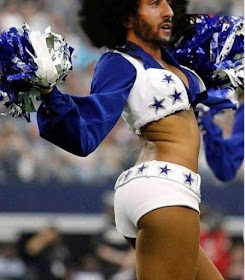 "Race hustlers" Farrakhan, Sharpton, Jackson, and Cigar Bill pose for the camera at Aretha Franklin's funeral. I hope everyone can see them for the hucksters they are.

It has been said by leftist to "never let a good crisis go to waste". I suppose in this case the wording could be changed from crisis to death or funeral. As of late, the leftist-deep state-MSM-commies have done their best to use the recent deaths of John McCain and Aretha Franklin to further their cause, gain exposure, etc.  I'm thinking there is very little in the way of positive results for the left in doing this. I never knew Aretha to be political in the least. I always thought she was a "soul singer" and a good one at that. Now, the left has tried to make her into sine sort of "civil and women's rights" figurehead,  The puppetmasters have also fatigued the public with the "John McCain Funeral Parade" loop. The handlers have kept John McCain's body out and attempted to preach him in to Valhalla until he surely has started to stink in a different way than from when he was alive. I do not know anyone who was a McCain fan while he was living or anyone who has watched any of this macabre show of lies. The force feeding of his "legacy" has hopefully alienated more people who might have been on the fence. Maybe these two freak shows will backfire and turn even more voters to the right. I sure hope so.