Sent in by Leigh:

George Soros, the infamous billionaire behind Antifa, Black Lives Matter, and most of the other radical liberal groups in this country, has recently been unmasked. An official petition, started on a .gov website, has already gotten nearly 50,000 signatures to declare him a terrorist.

If the petition receives 100,000 signatures by September 19th it will be submitted to the White House for an official response within 60 days. It’s high time that this criminal gets thrown in jail, and now with President Trump in office, it’s the perfect opportunity for us to take action.
The petition, which thousands have already signed, asks for George Soros to be declared a terrorist…but that’s not all. It also asks for the government to seize all of his organizations and their assets under RICO and NDAA laws, which will put a stop to the mayhem he’s causing on a global scale. 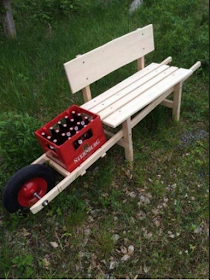 Meanwhile.. In One Of The Local ASSachusetts Towns...


This was an email that parents received:

Dear Parents and Families,
It seems like just yesterday that I was writing to wish you all a safe and relaxing summer. Now, with only one week until summer vacation ends, I hope that your summer was enjoyable.
All teachers officially returned today from the summer break, so the halls are again buzzing with excitement and anticipation of your child(ren)’s return. We started with our opening convocation this morning, focusing on the conditions we set to maximize student success. I'll have more to share in the coming months in that regard, but for now wanted to focus on opening day for students. Everyone is eager for next Tuesday, September 5th, when we open the doors and welcome your child(ren) back for the 2017/2018 school year.
As we return this year, we’re doing so in a very tense climate in our country. In light of the events of the past several weeks, I would be remiss if I did not take this opportunity to affirm the District’s commitment throughout all our schools to tolerance, equity, diversity, and inclusion. Throughout the course of last year, and through my conversations with parents, teachers, and students, our core values of Respect, Integrity, and Excellence for All were reaffirmed time and time again. If we truly believe and hold these as core values, then all must truly mean all, and “all” knows no race, gender, cognitive ability, or background. Words or actions that are racist, homophobic, xenophobic or discriminatory towards any individual or group cannot be accepted, as these behaviors are the complete opposite of what we’ve affirmed as our core values. We look forward to our continued partnership with you as we strive to be examples and model tolerance, acceptance, and the ability to respectfully and articulately engage with those we disagree with.
Thank you, and have a wonderful Labor Day weekend.

Yeah right…..
Lets see what kind of tolerance, acceptance & respect the first kid that shows up with an American flag or MAGA logo on a lunchbox or shirt or jacket gets…… 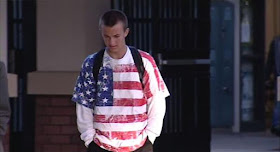 Way to go Matt Wuerker, you are now in the lead for the "2017 Idiot of the Year" Award

In light of what is probably going to go down as one of the most expensive and disruptive disasters in our nation's history, Matt Wuerker had to take a sucker punch with this distasteful cartoon and politicize  the flooding caused by Hurricane Harvey mocking Christians, Southerners, implying secessionist innuendos, etc. Is it any wonder that much of the populace has zero confidence in the MSM with their "fake news" and liberal communist agenda? Here is the vignette that is taking so much flak and rightly so. Too many morons in the media do not understand that if you play with poop long enough, you will eventually get it all over you. 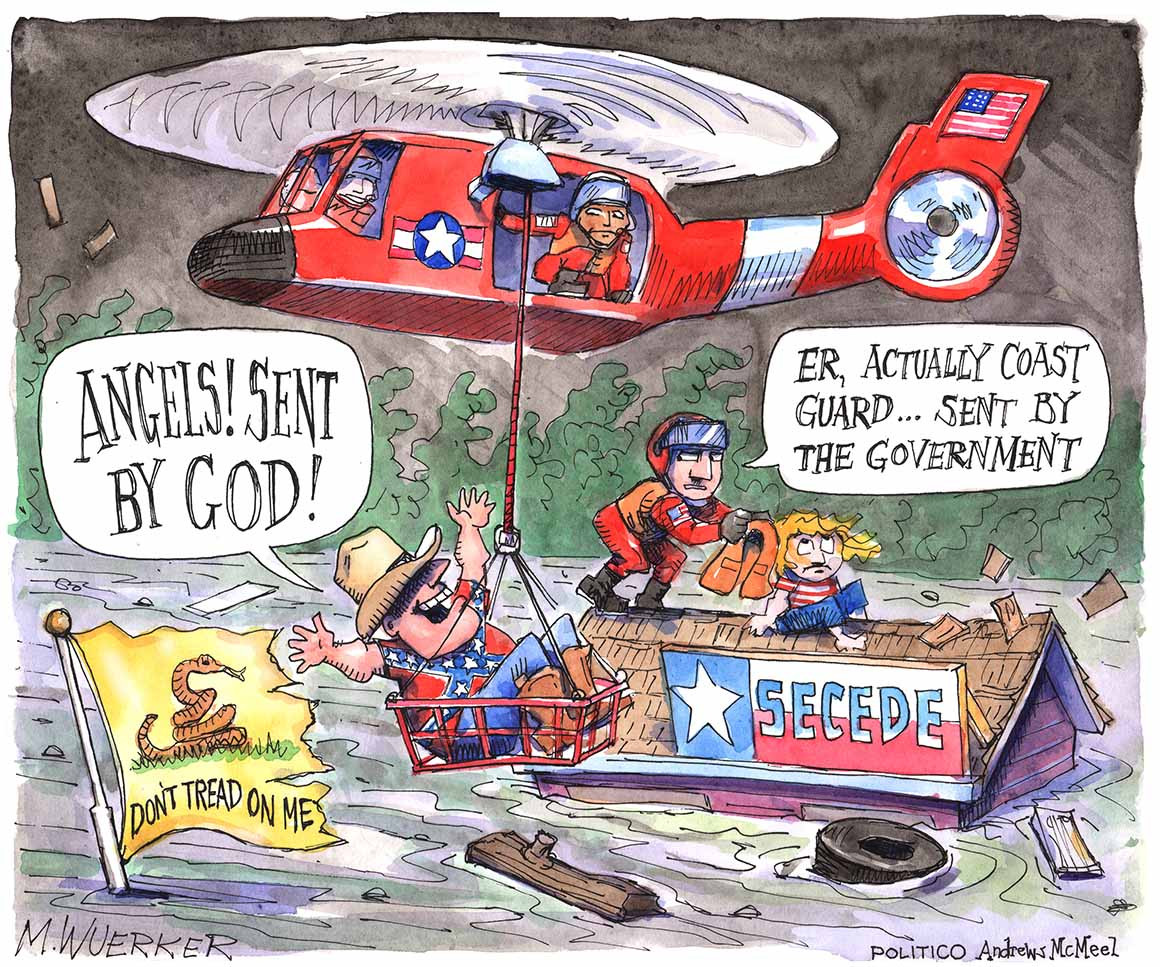 The article can be read Here. 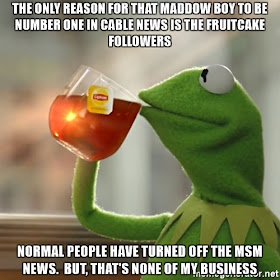 Feel Good Video Of The Day....

I think you will catch yourself slooowly smiling....... 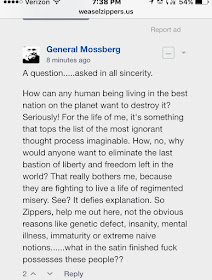 
Here is a link to the discussion thread at WZ<<<


The truck is all original, never any major work has been done to it. 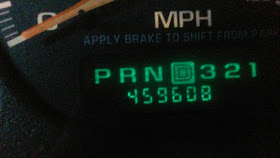 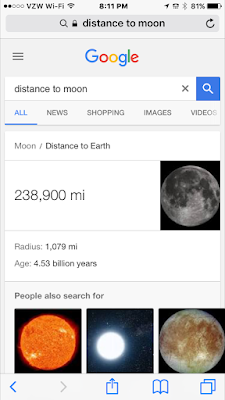 "lefties" hate this kind of logic 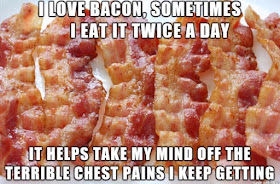 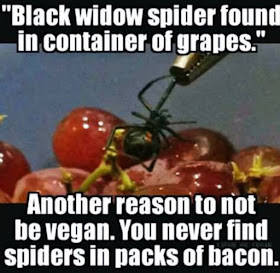 A Couple Good Videos Worth Sharing....

UPDATE! The Ten Causes Of The War Between The States By James W. King and LtCol Thomas M. Nelson

Last week I posted a well-written piece pertaining to the causes of the American Civil War which has received over 80,000 views and many comments. Almost all of the comments were of an inquiring nature asking for sources and where  information regarding the causes of the Civil War could be found. I was able to contact Mr. King (the author) and he sent me a listing of some of his sources. He also sent me the information for the post regarding the CSS Hunley that I just put up this morning and agreed he would send me other articles from time to time.  Thanks to all of our readers for stopping by and thank you Mr. King for your contributions. Below is a note of thanks and the sources. Jeffery

Thank you for reading my article 10 Causes and contacting me. I am an honor graduate of the Univ. of Georgia with advanced degrees but not in history. Virtually everything I have learned about The War For Southern Independence (Civil War) was learned after I joined the Sons of Confederate Veterans  (SCV) organization in 1988.
I have about 2000 facts, articles, quotes, etc. in "my documents" in my computer. I am planning to write a book. Northern historians have selected what they put in American history books and they have omitted "inconvenient history".There are thousands of sources that verify that which I wrote in my article 10 Causes. Here are a few references:
Books:
The South Under Siege 1830 to 2000 by Frank Conner. It has a list of reference books.
Truths of History by Mildred Lewis Rutherford
Red Republicans and Lincoln Marxists by Benson and Kennedy
War For What by Francis Springer
Lincoln Takes Command by Francis Springer
The Gray Book by SCV in the 1930's
The Invasion of the Southern States by Samuel Ashe (last surviving CSA Commissioned Officer) 1935
The Real Lincoln by Thomas DiLorenzo
A New Look at Abraham Lincoln His Agenda and an Unnecessary War by Thomas DiLorenzo
The South Was Right by Ronald & Donald Kennedy
Slavery Was Not The Cause of the War Between The States The Irrefutable Argument by Gene Kizer
Lincoln Uber Alles-Dictatorship Comes To America by John Avery Emison
The Uncivil War- Shattering the Historical Myths by Leonard Scruggs
Is Secession Treason by Albert Bledsoe
The Slave Narratives (one for each southern state 1934-1936)
Civil War Books—a checked price list by Broadfoot (Over 1000 reference books listed)
Confederate Veteran Magazine---Early 1900's to current issues
Southern Partisan magazine ---1990 to mid 2000's
Quotes and summaries from books by Bernhard Thuersam NC Sesq. Chairman posted on SHNV (Southern Heritage News and Views)
Causes of War by CSA Gen. Joseph Wheeler in 1894 speech to U.S. Congress
Causes of War by Gordon
Causes of War by Hunter
Causes of War by Christian
Causes of War by Settle
Causes of War by McCrady
Causes of War by Scruggs
Some Things For Which The South Did Not Fight by Henry Tucker Graham
An Inconvenient History-Causes of War by Republicae Part 1 and Part 2
The Lost Cause by Edward A. Pollard
Southern History of the War by Pollard
Bernhard Thuersam posts a summary or reference from 1 or more books weekly in SHNV
He has a huge library of books from the war era to current. I am going to see if he can send me list. There are so many older books I had never heard of until I began getting his postings.
The truth has been documented. It is just not what is taught in America's classrooms. The victor of a war writes the history. What passes as the history of the old South, the war, and reconstruction is at best a highly biased New England perspective and at worst no more than Yankee lies and propaganda.
James W. King
SCV Camp Commander
Albany Georgia 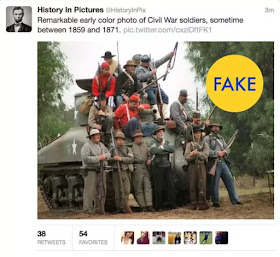 H/T to James in Georgia

Anyone seen this cocaine guy at the Mayweather McGregor fight?