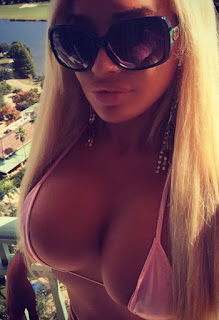 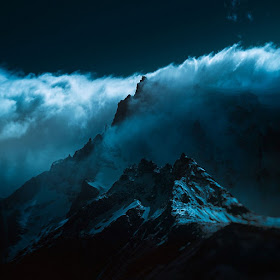 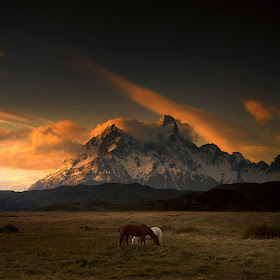 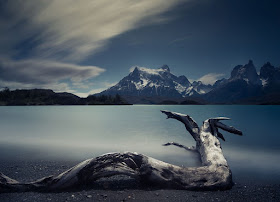 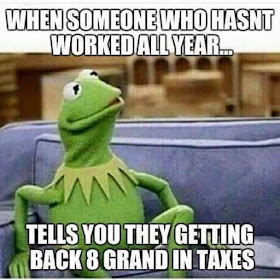 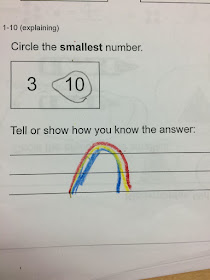 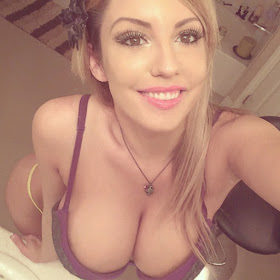 A tribe’s essence may sleep, but it never dies. It may lie dormant, but it will never go extinct.

"As new immigrants gain numerical power and ruling class protection in their host nations, the tribal instinct within their second and third generation cousins already in the country is released from its artificial suppression." 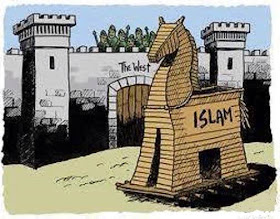 
The U.S. Preventive Services Task Force, an influential panel appointed by the Department of Health and Human Services, has released its recommendation that all U.S. adults over the age of 18 undergo a mental illness evaluation as part of their regular health check-ups.

The report makes a recommendation that all adults should be screened at least once, though the "optimal frequency of such screening has not been established." Thus the "B" grade; the panel is only "moderately" certain that blanket screenings could bring those billions down. However, that score does qualify the screenings for coverage under Obamacare.

"Look at the scam going on in schools; almost half the class are often designated "special needs", which requires extra teachers to be hired and classes to be smaller, which also requires teachers to be hired. If you think this ridiculous mental health "screening" won't be used to take away gun rights, you need your head examined. Oh the irony!"

Now all those kids that will move into adulthood are already labeled special needs even if they aren't.

It's an interesting perspective given the dynamics of the players involved:


Donald Trump says he won’t appear at the upcoming debate on FOX if Megyn Kelly is a moderator, and as of this writing, it appears she will be. Some of you asked me how this move by Trump could possibly be a smart thing.

On the 2D playing field, Trump appears petulant and whiney. Maybe narcissistic, fascist, and a little bit of Hitler too. And as FOX cleverly pointed out, negotiating with foreign leaders won’t be easier than Megyn Kelly’s questions.

So Trump loses badly in the second dimension.

Let’s shift to the third dimension and see if the view is different. For starters, tell me what you learned about all the other candidates today.

Meanwhile In Boilerdoc's Greenhouse, Prepping Has Taken On A New Meaning....... 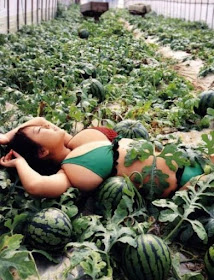 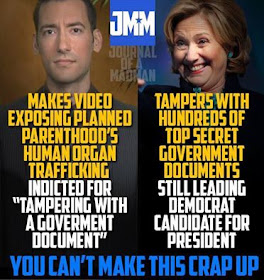 Borrowed from WHATBUBBAKNOWS
Irish at 10:00:00 AM No comments:
Share

This Video Is STILL Funny, Even If You've Seen It Already.... 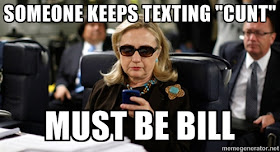 Is Anybody Paying Attention To The Massive Natural Gas Leak Near LA?

• Bob Bowcock, environmental scientist (at 18:00 in): “We’re starting to hear about the larges­­­t natural gas well leak in the U.S… The State of California and Southern California Gas Company say it’s leaking somewhere between 45,000 and 50,000 kilograms [99,000 and 110,000 pounds] per hour… We’ve done actual field measurements [and] it can be as much as three times greater than what’s being reported.”

• Erin Brockovich (at 31:05 in): “Every person I’ve talked to — thousands of people — are suffering rashes, dizziness, shakiness, they feel like they’re in a fog, nosebleeds, massive headaches… Reports of animals losing their hair, animals vomiting, animals with diarrhea — people actually relocate to hotels to find their animals have passed… You are actually the guinea pig in this situation… As we’re now learning that the magnitude of this is way beyond what any of us have ever been told, and reaches beyond where we have come in and know that there’s been dangers. We need to learn that that’s been happening.

• Camille Sears, meteorologist (at 41:45 in): “SoCalGas has said that things aren’t so bad because the leak is 1,200 feet above the elevation of the community, and that gas is lighter than air. Well, that’s not really the whole story… That gas is going downhill… [Infrared videos] show the plume just running down the hill like water… [which then] goes right into the communities. It’s very little dilution… At night, from midnight to 6:00 in the morning, 90% of the time the winds are coming from that direction [from the gas leak to the communities]. I doubled checked this, because it seems like a phenomenal amount of time that the winds are blowing from the gas leak to the community… It’s a very unfortunate situation that the leak is located where it is… The releases are probably two to three times greater than what the California Air Research Board has been reporting… It’s becoming quite clear that the State is underestimating the amount of gas that’s leaking. I’ve been doing this kind of analysis for 35 years. I’ve done thousands of them since I started doing this in 1980. I’ve never seen a release of this magnitude before… I feel really bad… to report this. It’s not only a worst case emission, it’s the great magnitude of emissions coming out, but it’s also sort of a worst case meteorological scenario that these releases happened to blow from the gas leak down in to the community at night 90 percent of the time. As we’ve seen, those gas emissions tend to flow downhill like water and go right into the communities.”

• Robin Greenberg, attorney (at 1:01:00 in): “Pets are really being affected… Time and again someone sends me photographs of their pet and have these horrible sores.”

• Bowcock (at 1:43:45 in): “This is a very dangerous condition, and it’s something that you all should be very, very concerned with… That’s a pretty substantial area and everyone in that are needs to be concerned about it… Veterinarians are very concerned about it… because the vets are actually seeing a lot of really, really sick animals… It is impacting the animals much, much more — believe me.”

LINK HERE AND LINK TO VIDEO 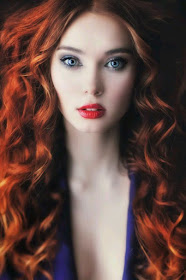 
This just happened a little while ago:

LEXINGTON, Mass. (WHDH) -
Police are on the scene of a deadly crash on Route 128 in Lexington, where a tire struck a car.
State Police said a vehicle lost a tire on the southbound side of Route 128. The tire then flew over the barrier and hit a car on the northbound side.
The person in the vehicle has been pronounced dead.


It appears the tire came off a Dodge pick-up and crossed the median: 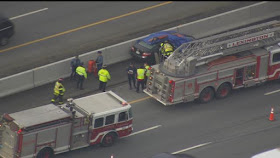 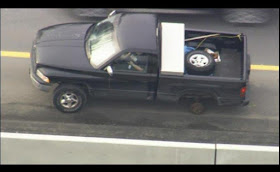 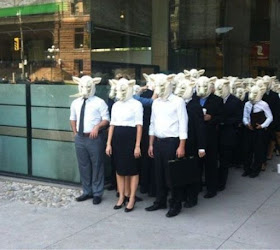 Do You Eat Chobani Yogurt?


CreepingSharia: Ever wonder why the federal government would be sending hundreds of foreign refugees to a relatively small town in Idaho?
Wonder no more.

These are some links that that readers posted in the comments at the link:


IF you still don't know where Obama stands. This one clip says it all.
As a Christian would you EVER make this faux pas?

Odysseus Found The Inspiration For The Current Header....


Her name is Katya Severnaya: 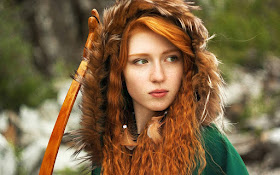 
MARTINSBURG, W. Va (WATE) – Wayne Bennett captured 40 inches of snow over 40 seconds in Martinsburg, West Virginia. Since he posted the video, the teacher at Berkeley County Schools said he couldn’t believe how many people have shared his video. 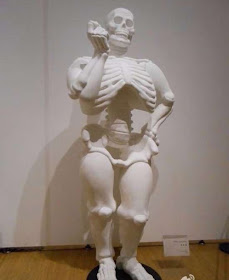 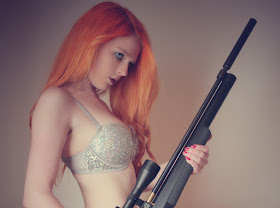 Meanwhile On A mASSachusetts Highway.. The Infidel Is Strong With This One....

Sporting a Mass plate too: 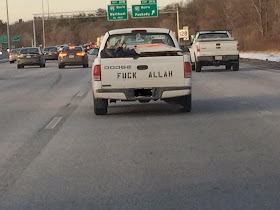 as seen by The Furious Frenchman on today's commute.
Irish at 4:25:00 PM No comments:
Share

Paddy was driving down the street in a sweat because he had an important meeting and couldn't find a parking place. Looking up to heaven he said, 'Lord take pity on me. If you find me a parking place I will go to Mass every Sunday for the rest of me life and give up me Irish Whiskey!' Miraculously, a parking place appeared.Paddy looked up again and said, 'Never mind, I found one.'


Paddy was in New York ..He was patiently waiting and watching the traffic cop on a busy street crossing. The cop stopped the flow of traffic and shouted, 'Okay, pedestrians.' Then he'd allow the traffic to pass.He'd done this several times, and Paddy still stood on the sidewalk.After the cop had shouted, 'Pedestrians!' for the tenth time, Paddy went over to him and said, 'Is it not about time ye let the Catholics                          across?'


Gallagher opened the morning newspaper and was dumbfounded to read in the obituary column that he had died. He quickly phoned his best friend, Finney. 'Did you see the paper?' asked Gallagher. 'They say I died!!''Yes, I saw it!' replied Finney. 'Where are ye callin' from?'


An Irish priest is driving down to New York and gets stopped for speeding in Connecticut .. The state trooper smells alcohol on the priest's breath and then sees an empty wine bottle on the floor of the car. He says, 'Sir, have you been drinking?''Just water,' says the priest.The trooper says, 'Then why do I smell wine?'The priest looks at the bottle and says, 'Good Lord! He's done it again!'

Walking into the bar, Mike said to Charlie the bartender, 'Pour me a stiff one - just had another fight with the little woman.' 'Oh yeah?' said Charlie, 'And how did this one end?''When it was over,' Mike replied, 'She came to me on her hands and knees.''Really,' said Charles, 'Now that's a switch! What did she say?' She said, 'Come out from under the bed, you little chicken.'


Paddy staggered home very late after another evening with his drinking buddy, Paddy. He took off his shoes to avoid waking his wife, Kathleen. He tiptoed as quietly as he could toward the stairs leading to their upstairs bedroom, but misjudged the bottom step. As he caught himself by grabbing the banister, his body swung around and he landed heavily on his rump. A whiskey bottle in each back pocket broke and made the landing especially painful. Managing not to yell, Paddy sprung up, pulled down his pants, and looked in the hall mirror to see that his butt cheeks were cut and bleeding. He managed to quietly find a full box of Band-Aids and began putting a Band-Aid as best he could on each place he saw blood.He then hid the now almost empty Band-Aid box and shuffled and stumbled his way to bed.. In the morning, Paddy woke up with searing pain in both his head and butt and Kathleen staring at him from across the room. She said, 'You were drunk again last night weren't you?'Paddy said, 'Why would you say such a mean thing?''Well,' Kathleen said, 'it could be the open front door, it could be the broken glass at the bottom of the stairs, it could be the drops of blood trailing through the house, it could be your bloodshot eyes, but mostly, it's all those Band-Aids stuck on the hall mirror.
Irish at 10:25:00 AM No comments:
Share I saw this over at WRSA

That Moment When The Hollyweird Libtards Have To Chew On Their Own Hypocrisy About The Academy Awards....

Complied and submitted by AFOI

http://www.americanthinker.com/articles/2016/01/5_reasons_why_our_f35s_are_too_dangerous_to_fly.html
** Remember, this is the plane Barackus favored over the F22.


http://www.americanthinker.com/blog/2016/01/clinton_fails_the_truman_test.html
** Back in the days when people had honor.


http://www.jihadwatch.org/2016/01/muslim-stabs-israeli-mother-of-six-to-death-in-her-home
** In a war, civilians often pay the heaviest price.  But it's INCIDENTAL to the "business" of
war.  This is not incidental.  This is not "collateral damage".  This is a one-on-one murder.
Dollars to donuts they're dancing in the streets at the news.