The First Cut is the Deepest 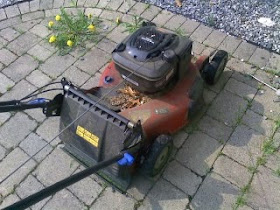 Imagine you're driving at the maximum speed allowed on a major highway and you have to suddenly stop the car.

It's basically what Boeing test pilot Captain Kirk Vining had to do recently with the new 747-8 Freighter during one of the most dramatic airplane certification tests. However, instead of a 4,000-pound (1815 kilograms) car, the 747-8 weighed in at close to one million pounds.

WHAT THE HELL.... The Rookie White House dweller, and his inept minions have changed the bin laden story more often than my daughter changes outfits* to go out on a Saturday night... (* which is amazing in itself )


T.L. Davis is a master wordsmith. He has been a little quiet lately, but this makes up for it. Give this a read, it is well worth it, then go visit him at the link below...


I have not written about the death of Osama Bin Laden, because for me, a decade later, it is more of a shrugging of the shoulders sentiment that I have. If they had captured and killed him in the first few weeks, or even months, it would have the impact of a job well-done, but this much later? Yeah, I'm glad he's dead and if it were me, it wouldn't have taken 16 hours to decide to kill him, it wouldn't have taken 16 seconds. Osama Bin Laden deserved a hit squad and that's exactly what he got. The Navy Seals are professionals who know how to neutralize a target in short order and they were used under the guise of warfare to execute an assassination. When was Osama Bin Laden read his Miranda rights? Hey, I'm glad they did it, but by Obama's own assessment, this was nothing short of an assassination and the idea that he would so quickly head out to spike the football and go into a victory dance over it is disgusting.


A leftist will always tell you what he is doing by denying it to your face. Therefore, Obama tells us he is not spiking the football, or using this to his political advantage, then quickly puts together a ceremony where he lays a wreath at Ground Zero...for what? It isn't the anniversary of 9/11. It isn't the end of any war in Afghanistan or Iraq. It isn't a victory over an army or a nation. The only thing that there is to celebrate is the assassination of Osama Bin Laden, an act that he takes full credit for. A moment that he has chosen to secure all to himself as if there were no human Navy Seals involved, but only mere Obamabots doing his distinct and direct bidding.


Barack Obama has taken the advantages of "enhanced interrogation techniques" and the prisoners in Guantanamo Bay to achieve a photo op for his re-election campaign. He has done so after taking the political high-ground of denouncing such things as war crimes, as un-American and yet he sits atop the corpses of the men and women who fought to secure these prisoners and supply this evidence and raises the American flag, burying the staff into the bodies of those who sacrificed everything and thumps his chest with manly fervor.


The press, who daily spent gallons of ink defaming the policies of the Bush Administration as evil and grotesque clamor aboard the Barack Obama murder train and applaud with great enthusiasm. They beam with approval at his swagger, at his "gutsy" call, at his rugged determination to secure the body of Osama Bin Laden. What jackals they are, what Monty Python-like minstrels the press is for this pathetic attempt to rehabilitate the character of this dismal loser, to recast him not as a brilliant bracket picker, but as a barrel-chested leader of black ops. He is a fool and a buffoon and no amount of newsprint to the contrary can cover up the pile of dung they have helped to place on the nations living room carpet.


Yes, kill Osama Bin Laden, kill him dead, shoot him with your own hands. Have the SEALS arrest the criminal, bring him on board any Navy ship, hold him out at sea until Marine One can land and you can arrive with a 1911 and put the SOB out of his misery, then hold your blood-sprayed hand up that still grips the pistol and tell me about your "gutsy" call. Or, just leave it to the professionals and thank God every day that there was a George Bush and Guantanamo and "enhanced interrogation techniques" and you didn't have to lift a filthy little finger until you pointed it to your own chest on national television.

A BIG H/T to Billy Bob at Hell on Earth 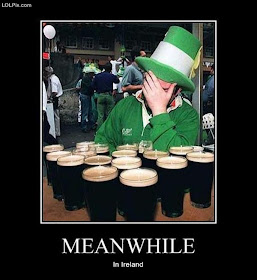 Note.. I was cleaning my files on the computer and came across this letter I had written for a friend of mine. It is a true story.

I never thought this would happen to me, I read the forum letters and don't usually believe them.

This all changed last week.

It was an overcast Friday afternoon as I headed for the local watering hole.

My name is Steve and this is my story.

I work for a tree service company in New England. I have a company truck that has our name stenciled on it so the boss asks me to park out back at my favorite bar. Remind me to Thank him. It was a long week so I was kinda daydreaming as I headed out to the outskirts of the blacktop. I found a spot and started gathering my glasses and butts to go inside for a frosty cold beer and some bullshittin’ with my friends. Glancing out the passenger door window I notice two chicks kinda sitting close together in the car beside mine.

Thursday Night..I Need a Laugh.... and this delivered... 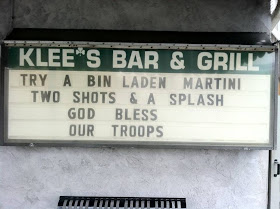 There are a bunch of discrepancies and changes to the narrative that the White House is telling us about the Bin Laden escapade...

As they sat in their chairs watching and listening: 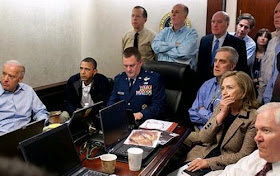 We are to believe that the "Fog of War" is to blame for the changes???? 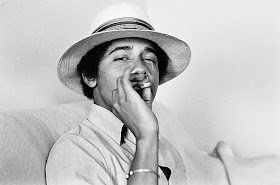 Borepatch would like to humbly propose a meme, one of mockery of The Won on TheOne'sday (err, Wednesday).  A regular day in our little corner of Al Gore's series of tubes, devoted to pricking the balloon of conceit with laughter. 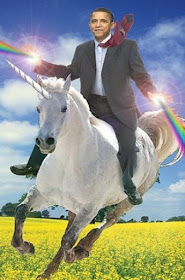 With allll the fanfare.... nothing has changed.....

They must have ice water running in their veins.
Irish at 10:37:00 AM No comments:
Share

Who ever ordered todays weather...